I am locked at home, due to the COVID-19 emergency in Italy. Luckily I am healthy, but there is not much to do, inside. I thought it might be nice to spend some time to talk about seed germination models and the connections with survival analysis.

We all know that seeds need water to germinate. Indeed, the absorption of water activates the hydrolytic enzymes, which break down food resources stored in seeds and provide energy for germination. As the consequence, there is a very close relationship between water content in the substrate and germination velocity: the higher the water content the quickest the germination, as long as the availability of oxygen does not become a problem (well, water and oxygen in soil may compete for space and a high water content may result in oxygen shortage).

Indeed, it is relevant to build germination models, linking the proportion of germinated seeds to water availability in the substrate; these models are usually known as hydro-time (HT) models. The starting point is the famous equation of Bradford (1992), where the germination rate (GR) for the \(i-th\) seed in the lot is expressed as a linear function of water potential in the substrate (\(\Psi\)):

Elsewhere in this website, I show that Equation 1 can be fitted to germination data in a two-steps fashion. In this page we will see how we can embed Equation 1 into a germination model, to predict the proportion of germinated seeds, depending on time and water content in the substrate. As usual, let’s start from a practical example.

The dataset was published by Pace et al. (2012). It is available as rape in the drcSeedGerm package, which needs to be installed from github (see below). The following code loads the necessary packages, loads the dataset rape and shows the first six lines.

We can see that the data are grouped by assessment interval: ‘timeAf’ represents the moment when germinated seeds were counted, while ’timeBef’ represents the previous inspection time (or the beginning of the assay). The column ’nSeeds’ is the number of seeds that germinated during the time interval between ‘timeBef’ and ‘timeAf. The ’propCum’ column contains the cumulative proportions of germinated seeds and it is not necessary for time-to-event models. The ‘drcSeedGerm’ package contains some service functions which might help prepare the dataset in this form (see the documentation for the functions ‘makeDrm()’ and ‘makeDrm2()’).

Models based on the distribution of germination time

How can we rework Equation 1 to predict the proportion of germinated seeds, as a function of time and water potential? One line of attack follows the proposal we made in a relatively recent paper (Onofri at al., 2018). We started from the idea that the time course of the proportion of germinated seeds (\(P\)) is expected to increase over time, according to a S-shaped curve, such as the usual log-logistic cumulative probability function (other cumulative distribution functions can be used; see our original paper):

where \(GR_{50}\) is the median germination rate in the population.

We can now express \(GR_{50}\), \(b\) and \(P_{MAX}\) as linear/nonlinear functions of \(\Psi\) (temperature and other environmental variables can be included as well. See our original paper). In our paper, for \(GR_{50}\), we used the Equation 1 above. For \(P_{MAX}\), we used a shifted exponential distribution, which implies that germination capability is fully determined by the distribution of base water potential within the population and no germinations occur at \(\Psi \leq \Psi_b\):

In the above equation, \(\sigma_{\Psi_b}\) represents the variability of \(\Psi_b\) within the population, which determines the steepness of the increase in \(P_{MAX}\) as \(\Psi\) increases. \(G\) is the germinable fraction, accounting for the fact that \(P_{MAX}\) may not reach 1, regardless of time and water potential.

The parameter \(b\) was assumed to be constant and independent on \(\Psi\). In the end, our hydro-time model is composed by four sub-models:

This hydro-time model was implemented in R as the HTE1() function, and it is available within the drcSeedGerm package, together with the appropriate self-starting routine. It can be fitting by using the drm() function in the drc package. Please, note that the argument type has to be set to “event”.

As seeds are clustered in Petri dishes, in order not to violate the independence assumption, it is preferable to get cluster robust standard errors. One possibility is to use the grouped version of the sandwich estimator, as available in the sandwich package (Berger, 2017). The function coeftest is available in the lmtest package (Zeileis, 2002):

An alternative way to obtain cluster robust standard errors is to use the delete-a-group jackknife technique, which I described in one of my previous papers (Onofri et al., 2014). This is available in the jackGroupSE() function in the drcSeedGerm package. It takes quite a bit of computing time, so you may need to be patient, especially if you have a lot of Petri dishes.

Once the model is fitted, we may be interested in using the fitted to curve to retrieve some biologically relevant information. For example, it may be interesting to retrieve the germination rates for some selected percentiles (e.g., the 30th, 20th and 10th percentiles). This is possible using the GRate() function, that is a wrapper for the original ED() function in the package drc. It reverses the behavior of the ED() function, in the sense that it considers, by default, the percentiles for the whole population, including the ungerminated fraction, which is, in our opinion, the most widespread interpretation of germination rates in seed science. The GRate() function works very much like the ED() function, although additional variables, such as the selected \(\Psi\) level can be specified by using the argument x2.

As we said, cluster robust standard errors are recommended. The GRate() function allows entering a user-defined variance-covariance matrix, that is obtained by using the vcovCL() function in the sandwich package. If necessary, germination times can be obtained in a similar way, by using the GTime() function.

Last, but not least, we can predict the proportion of germinated seeds at given time and water potential level.

Models based on the distribution of \(\Psi_b\)

Another type of hydro-time model was proposed by Bradford (2002) and later extended by Mesgaran et al (2013). This approach starts always from Equation 1; from that equation, considering that the germination time is the inverse of the GR, we can easily get to the following equation:

We know that the seeds within a population do not germinate altogether in the same moment, as they have different individual values of base water potential. If the population is big enough, we can describe the variation of \(\Psi_b\) within the population by using some density function, possibly parameterised by way of a location (\(\mu\)) and a scale (\(\sigma\)) parameter: 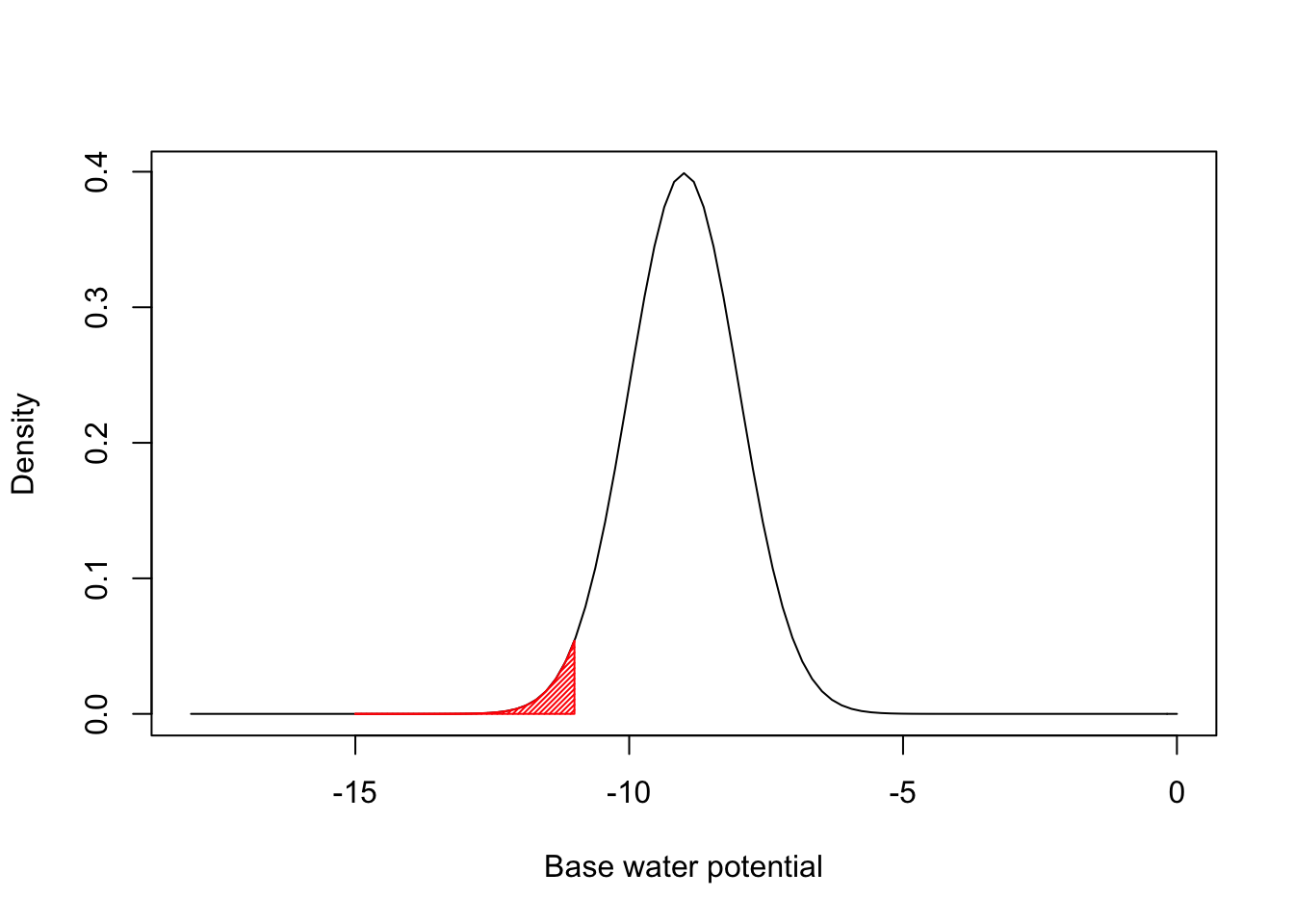 The red left tail represents the proportion of seeds that germinate during the first day, as they have base water potentials equal to or lower than -11. By using the gaussian cumulative distribution function we can easily see that that proportion is 0.228:

More generally, we can write:

where \(\Phi\) is the selected cumulative distribution function. The above model returns the proportion of germinated seeds (G), as a function of time and water potential in the substrate. According to Bradford (2002), \(\Phi\) is cumulative gaussian.

We implemented this model in R as the function HTnorm() that is available within the drcSeedGerm package and it is meant to be used with the drm() function, in the drc package.

Mesgaran et al (2013) suggested that the distribution of base water potential within the population may not be gaussian and proposed several alternatives, which we have all implemented within the package. In all, drcSeedGerm contains six possible distributions:

Distributions based on logarithms (the log-logistic and all other distributions thereafter) are only defined for positive amounts. On the contrary, we know that base water potential is mostly negative. Therefore, shifted distributions need to be used, by introducing a shifting parameter \(\delta\) which ‘moves’ the distribution to the left, along the x-axis, so that negative values are possible (see Mesgaran et al., 2013).

Let’s fit the above functions to the ‘rape’ dataset. But, before, let me highlight that providing starting values is not necessary, as self-starting routines are already implemented for all models.

What is the best model for this dataset? Let’s use the Akaike’s Information Criterion (AIC) to decide:

For this latter model, we take a look at the value of estimated parameters. Cluster robust standard errors can be obtained as before, by way of the sandwich estimator or a fully iterated delete-a-group jackknife estimator.

Germination rates and times for a certain percentile (e.g. GR50, GR30), can be obtained by using the GRate() and GTime() function in drcSeedGerm. Again, the use of cluster-robust standard errors is highly recommended.

Let’s use the predictSG() function to plot the ‘modHTE’ and ‘mod4’ objects together in the same graph. 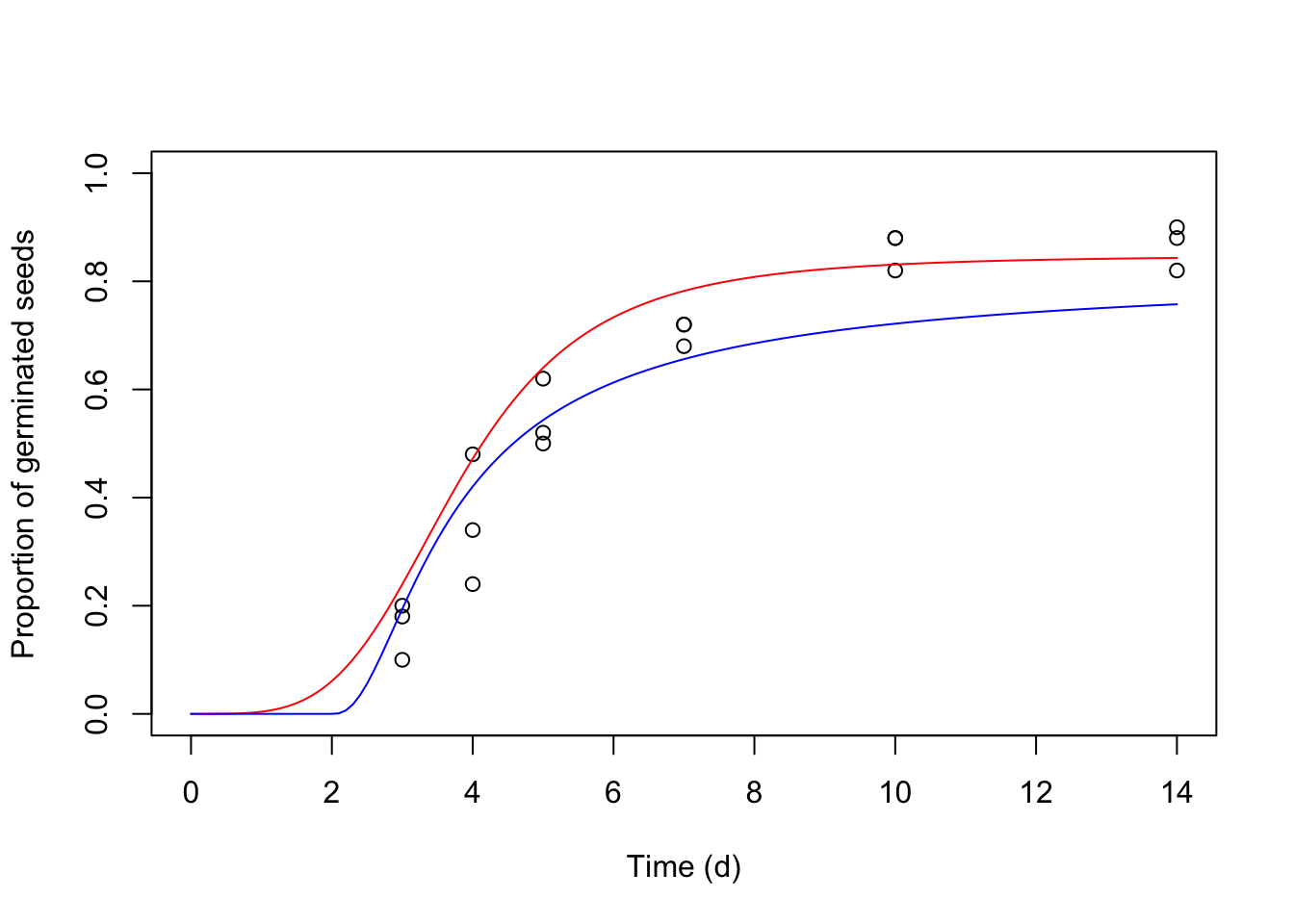 Let us conclude this page by giving some detail on all equations.

The equation for the model HTnorm(). Here, we show all other equations, as implemented in our package.

A collection of self-starters for nonlinear regression in R